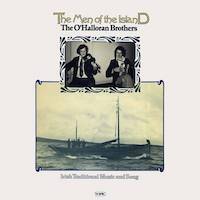 Des O'Halloran speaks briefly about his youth in Inishbofin, his 22 years in London, his return to Ireland, and his varied musical career. He sings - both sean-nós and more popular fare - and plays the fiddle. He has toured the world with the Sharon Shannon Band and with other artists including Willie Nelson. He and his brother Vincent recorded an album of traditional music The Men of the Island (Topic Records, 1976 - pictured) and in 2001 he released a solo album, The Pound Road.