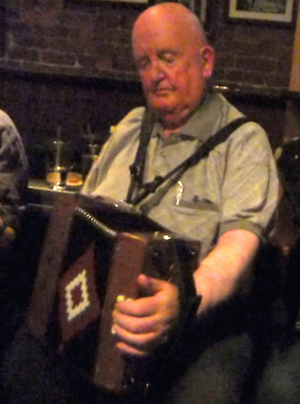 Jerry Lynch starts by telling his story in his own words. He reflects on how he learned music, his interest in different musical genres, and his time with the Kilfenora Céilí Band. He migrated to New York in October 1959 with his wife Betty and though he had some trouble getting used to life there at first, he eventually settled in. He worked in tunnels and played music in the city's Irish dance halls. He and his family returned to Ireland in 1977, but Jerry had to return to New York for a few years to ensure he could retire with a sufficient pension. He settled permanently in Ireland in 1994.

Sadly, Jerry passed away in May 2011. The interview appears here with the kind permission of his family.