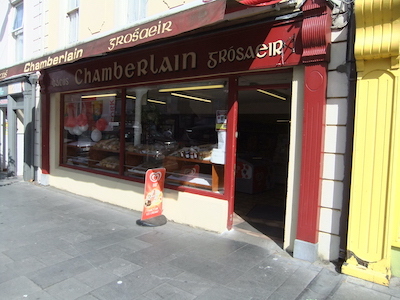 Sean Chamberlain describes his youth in Mitchelstown, Co. Cork, his migration to London, and the many dance bands he played in over the years. He returned in 1973 to help his brother open a bakery. He lives in the house his family has inhabited since at least 1834 and the bakery remains open in the town centre.

In the first photograph, he sits at his kitchen table with the old biscuit tin that held generations of his family's correspondence and other documents (now held by the Cork City and County Archives). The other photograph shows the Chamberlain Bakery in Mitchelstown. Photographs taken by Sara Goek, 2013.