Photographs contributed by the people featured on this site and others taken by Sara S. Goek. 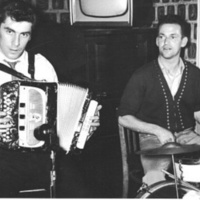 Photographs of Kevin McDermott playing the accordion as a young man in London. The first was taken in a pub on Holloway Road in 1962. The second was taken in the Duke of Clarence pub in Finsbury Park in 1964. Pictured (left to right) are Tony Howley… 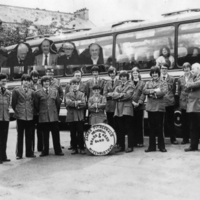 The James Fitzgerald Memorial Brass & Reed Band of Mitchelstown, Co. Cork in 1980 on their way to play at a competition in Clonakilty. 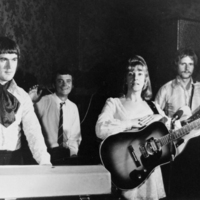 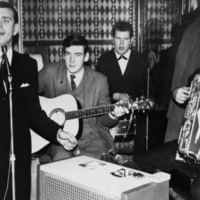 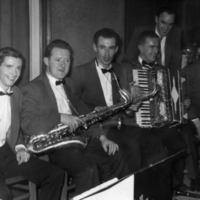 The Woodpeckers playing at the Cricklewood Hotel in London, c.1960. They started as part of the Cricklewood bus garage social club and eventually ended up playing for social events at other groups too.
Left to right: Jimmy Hanly (from Mitchelstown),… 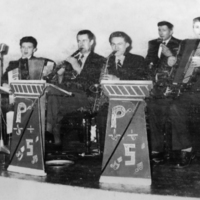 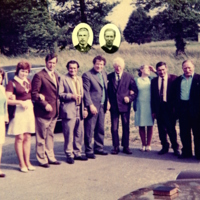 The Henry family, at their mother's funeral in 1972. It was the only time all eleven siblings were together in one place. Left to right they stand in order from youngest to eldest. Kevin is fourth from the left. 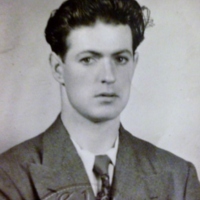 Photographs of Kevin Henry, courtesy of his daughter, Mary Carroll.
In the order displayed they are:
A passport photo from 1950
Kevin holding a set of pipes at a feis in 1954
A studio portrait from 1970
Kevin wearing a tam o' shanter and playing… 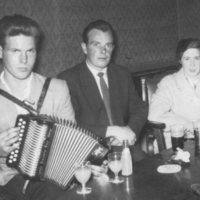 Two photographs of Danny Meehan from his time in London. The first shows him holding an accordion and sitting with his cousin Johnny Meehan and Johnny's wife Brenda at The Vic in Kilburn in 1958. In the second, Danny is playing fiddle on stage in the… 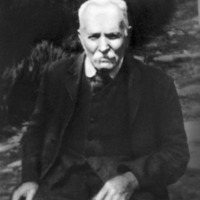 Photographs from Danny Meehan's childhood and of his family members. They depict:
1) Peter Meehan, Danny's grandfather
2) Susan McGroarty, Danny's grandmother
3) Danny (holding fiddle) with his Aunt Jane and family
4) Danny as a baby being held…
View all 11 items